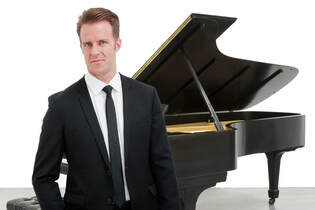 ​Bryan Wallick is gaining recognition as one of the great American virtuoso pianists of his generation. Gold medalist of the 1997 Vladimir Horowitz International Piano Competition in Kiev, he has performed throughout the United States, Europe, and Africa.

Bryan Wallick's 2021-22 engagements include debut performances with the Fort Collins Symphony, Boulder Symphony, Western Piedmont Symphony, and return engagements with the Brevard Symphony, Cape Town Philharmonic, Johannesburg Philharmonic and Kwa-zulu Natal Philharmonic.  He makes his debut for the Detroit Chamber Music Society, the Library of Congress with cellist Zuill Bailey and performs his solo recital "Virtuosic Fugue" Vol. 2 throughout the USA and South Africa, including a return to the Ravinia Festival in August 2022.

Bryan Wallick has performed on Chicago’s WFMT Fazioli Series and “Live on WFMT,” on BBC's radio show "In Tune," National Ukrainian Television and Radio, on Danish National Radio, and on NPR's "Performance Today." He was given a grant in 2006 by the Scottsdale Center for the Performing Arts to explore his synesthetic realities in a multimedia project that allows the audience to see the colors he experiences while performing.  Synesthesia is the ability to experience two or more sensory experiences with one stimulus. Bryan Wallick sees colors with each musical pitch and has created a computer program that projects images of his colored visions to the audience.

Mr. Wallick studied with Jerome Lowenthal in New York City where he was the first Juilliard School graduate to receive both an undergraduate Honors Diploma (2000) and an accelerated master's Degree (2001).  He continued his studies with Christopher Elton in London at the Royal Academy of Music where he was the recipient of the Associated Board International Scholarship, receiving a Post-graduate Diploma with Distinction, and previously studied with Eugene and Elisabeth Pridonoff at the Cincinnati College Conservatory of Music.
​
Mr. Wallick has recently been appointed as Assistant Professor of piano at Colorado State University where he lives with his wife and three children.  George Plimpton's feature article on Bryan Wallick appeared in the March 2002 edition of Contents magazine.