Leslie Stewart has been Music Director of the Health and Wellness Community Orchestra since it was founded at Poudre Valley Hospital in 2008. In 2013 she was honored with the “Outstanding Service Award” by the CSU College of Liberal Arts for her work with this ensemble and her accomplishments as Director of CSU’s Summer Master of Music Education degree with a Specialization in Conducting. In addition, Ms. Stewart is Director of the CSU String Pedagogy Program and conducts the CSU Concert Orchestra. She also plays violin in a number of faculty chamber ensembles, including the Verdoro String Trio with Professors Margaret Miller and Barbara Thiem.

A graduate of Interlochen Arts Academy, Ms. Stewart holds Bachelor and Masters degrees in Music
Performance from the University of Southern California. She was a violinist with the Puerto Rico Symphony and Alabama Symphony before moving to Northern California in 1989 to conduct the Marin Symphony Youth Orchestra and direct the Marin Symphony’s Youth Programs. Beginning in 1998, she served as Music Director and Conductor of the Bay Youth Orchestra of Virginia culminating in the Bay Youth Symphony’s performance at the Edinburgh Fringe Festival in August 2006. Ms. Stewart has guest conducted honor orchestras, youth symphonies, and community orchestras throughout the United States and in Germany and Brazil.

​The orchestra's 10th anniversary was recognized by the Mayor and City Council of Ft. Collins when it proclaimed February 20, 2018 as "Leslie Stewart Day" 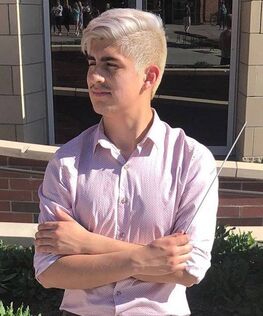 Andrew (Drew) Mendizabal was named Assistant Conductor of the Health & Wellness Community Orchestra in 2021. Last year he earned his Masters degree in Instrumental Conducting under the guidance of Maestro Wes Kenney at Colorado State University. In 2021 he joined the conducting faculty of the Northern Colorado Youth Orchestra. He was named Orchestra Director at Timnath High School starting fall 2022.
​
Drew is a native of Las Vegas, Nevada and received his Bachelor of Music Education at the University of Nevada, Reno in 2019, where he studied clarinet and conducting under the direction of Dr. Reed Chamberlin and Dr. Jason Altieri. He received awards for his leadership, academics and musicianship for his involvement within the UNR music department and with the university bands.

At CSU, Drew had many opportunities to conduct both the CSU Symphony and Concert Orchestra. In 2021, he participated in a conducting workshop with Marin Alsop, Music Director of the Baltimore Symphony. He has recently been named the Instrumental Conductor at Ridgeview Classical School in Fort Collins.