All concerts are FREE. Donations are accepted.
The orchestra performs 3-4 concerts a year. 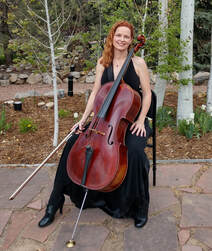 Becky Kutz Osterberg is Principal Cello of both Fort Collins Symphony and Greeley Philharmonic, and a member of Cheyenne Symphony. Other orchestra and opera ensemble performances include Opera Colorado, Colorado Symphony, Steamboat Springs Orchestra and Colorado Springs Philharmonic. Additionally, she plays in a wide variety of small chamber ensembles throughout the Front Range on both Acoustic and Electric Cello. Mrs. Kutz Osterberg has an established private cello studio in Fort Collins and Steamboat Springs and more than 20 years of instructional experience private teaching and ensemble coaching. 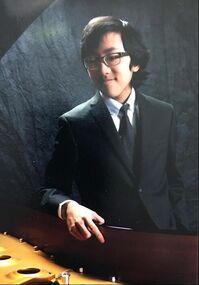 This concert is sponsored by the International Keyboard Odyssiad® & Festival, U.S.A. (IKOF).  Headquartered in Fort Collins, IKOF is a 501 C (3) non-profit corporation that produces an annual international  piano competition and festival in the summer months at the University Center for the Arts on the campus of Colorado State University. The Preliminary Round of the Odyssiad® is Online. The  Semifinal and Final Rounds of the Odyssiad® take place LIVE during the festival and are free and open to the public.

Jeffrey Chin Bio
20-year-old Jeffrey Chin graduated from the Juilliard School Pre-college in May 2019 and is currently a student of Yoshikazu Nagai atthe San Francisco Conservatory of Music. At Juilliard Pre-college, he
was named a Fellow of the Artemisia Academia at Yale University and was selected by international superstar, Lang Lang, as a Young Scholar of the Lang Lang International Music Foundation.  In 2019, he performed a weekend of memorable piano concerts with the Lang Lang Young Scholars in Lustawice, Poland and was later selected by the renowned Gilmore Keyboard Festival to perform several concerts in Kalamazoo, Michigan.
​
A native of Denver, the young piano prodigy first studied piano with Larry Graham and Jasmine Steadman before entering Juilliard Pre- college.  In Colorado, Jeffrey was the recipient of numerous top prizes and accolades from an early age.  At age 11 he won the Steinway Concerto Competition and performed with the Colorado Symphony Orchestra; at age 13, he was named Top Performer in the Junior Category of the Young Musicians Foundation of Colorado and was a Silver Medalist at the International Keyboard Odyssiad® and Festival.  At age 14, he won First Place in the Colorado and West Central Division of the MTNA Junior Piano Competition and became an MTNA National Finalist. Jeffrey was a top prize winner in the 2016 Midwest International Piano Competition and attended the Aspen Music Festival and School in 2015-2017, where he was selected for masterclasses with Arie Vardi, Stephen Hough and Inon Barnatan.  In addition to the Colorado Symphony Orchestra, Jeffrey has performed as soloist with the National Repertory Orchestra, Breckenridge Symphony Orchestra, Boulder Symphony Orchestra, Colorado Chamber Orchestra, Lamont Summer Academy Orchestra, and the Midwest Young Artist Orchestra.

The Health and Wellness Community Orchestra was awarded a Fort Fund grant for the 2021-22 concert season. This is the second grant from Fort Fund that our orchestra has received from the City of Fort Collins.

Our grant for the 2020-21 season was used to pay for live-streaming of our concert
Sunday, May 2 , 2021. The concert was performed for live-streaming only in the
Atrium of the new Grays Peak Health Sciences Building on the Front Range Community College
Larimer Campus. FRCC generously made this facility available for our rehearsals and concert
this spring.
​
The program opened with Albinoni’s popular Adagio in g minor, led by our Assistant
Conductor Noelle Bauman-Stucky. Our harpist, Katie Miksch, was featured in Debussy’s
Danses Sacre and Profane. The program concluded with Tchaikovsky’s String Serenade. The
final two works were conducted by our Music Director, Leslie Stewart.